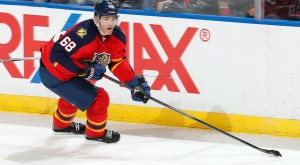 Here is article on Jaromir Jagr who says he wants to play in the NHL until he’s 50 years old!

Considering the average “expiry date” or retirement age of an NHLer is 28 years old, the fact that he’s still playing (and producing!) at 43 is incredible. He’s already one of the 10 oldest players to play in history. And looking at him now, and what he’s done to this young Panthers team, it’s not unthinkable that he could keep going till 50.

What I take out of this, personnally is that “nothing is written in stone”. There are no rules for yourself unless you say there is. Jagr is clearly saying: “I hear most of you saying that I’m too old for this, but I’m choosing hockey, and hockey it shall be.”

He then proceeds to doing what he needs to do in order to stay there: he works harder than everyone else, reportedly checking into the arena 2 hours before anyone else, doing additional weight training and conditining.

Absolutely incredible. Very inspiring. The article is quite a good read and funny. I’m very inspired by Jagr’s story, and really, what I perceive to be someone who does what it takes to do what he loves, and to not let something age or anything stop him.

Go Jagr! And Go Panthers! Coached by an Gerard Gallant, an Acadian cousin from PEI ; )